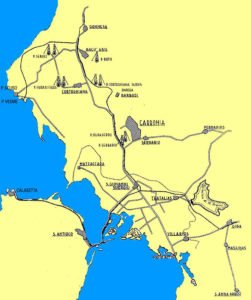 “On the 7th of November 1834, walking along the road that connects Iglesias to Gonnesa and Terra Segada, as I ended up at the eastern foot of the small Monte Lisau, which dominates the aforementioned town, I found, along the Flumentepido route, a fragment of grey sandstone to which a carbonaceous black substance was attached; after performing some tests, I realised it was a real fossil fuel; I tried in vain to identify the deposit to which it could belong.”

This description of the first discovery of coal fragments in 1834, provided by General Alberto Lamarmora in his “Voyage en Sardaigne”, published in 1875, was a first attempt to trace the history of Sulcis coal basin – the most important mining area in Italy – and its exploitation. The deposit was finally discovered in 1851 by Ubaldo Millo, who had the first pits excavated from which fossil fuel was extracted.
Sulcis coal basin is located in an area rich in different mineral (lead, iron, zinc) deposits, traditionally characterised by a very low population density and whose economy was mainly based on agriculture and pastoralism, before the systematic exploitation of its subsoil resources began in the second half of the 19th century. Subsequently, small towns such as Bacu Abis, Cortoghiana and, later, Carbonia developed around this mining area.
Sulcis coal basin, dating back to the Cenozoic Era, is located in south-western Sardinia and covers an area of about 100km2, from Fontanamare to the volcanoes near Serbariu. To the east, it is delimited by the Paleozoic elevations between Gonnesa and Serbariu, to the west it continues beneath the sea, although research has been limited mostly to the mainland. The basin develops underground from the bottom upwards with typical local formations called the “Miliolitico”, the “Produttivo”, the “Arenarie del Cixerri”, Vulcanites and superficial deposits typical of the Quaternary age. The coal from Sulcis coal basin is mostly the result of the decomposition and transformation of leaves, spores, pollens and algae; branches (only found in Seruci) and roots are quite rare. This suggests that these materials come from other places and were transported by water and atmospheric agents.