The formation of coal 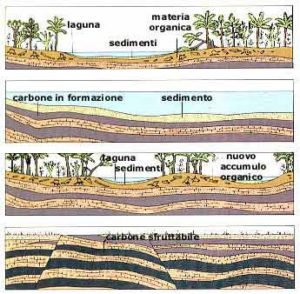 Coal is a combustible black or dark brown sedimentary rock consisting of amorphous carbon, hydrocarbons and, in smaller amounts, sulphides and other secondary components. Coal is the result of the very slow decomposition (pyrolysis) of biomass – mostly vegetables – buried under sediment layers of varying thicknesses. In order for coal to form, organic remains must rapidly find themselves under anoxic conditions immediately after their death or disarticulation. Ideal environments for these processes are the places that facilitate the rapid burial of uprooted plants, such as river mouths, or those where oxygenation rates are quite low, such as lakes, swamps and peat bogs.
Under these conditions, the plant remains buried under sediments – in particular the organic part making up the wood (oxygen, hydrogen, nitrogen) – are attacked and progressively decomposed by anaerobic bacteria which metabolize them and enrich their main inorganic component – carbon – determining, depending on the time required for the remaining mass to be compressed, a volume-carbon ratio which generates different types of fuel. Coal can be classified based on chemical, petrographic, geological or rank criteria.